Emptying out my brain on a Saturday morning 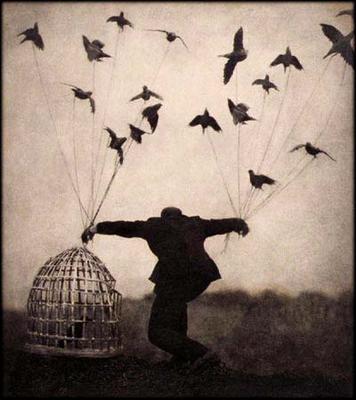 'Flying Lessons', a photogravure by Robert and Shana ParkeHarrison (USA)
So it's just gone 10.44am on Saturday morning, and I'm sitting in front of the computer on the new ergonomic desk chair that I bought myself this week. My back will thank me for it, although my chiropractor will probably be sad cos it means she'll see less of me, which in my book is officially A GOOD THING (tm).

Right now I should be working: specifically, I should be reading though, then scoring on their artistic merit, a big folder of Arts Victoria grant applications that's sitting on my kitchen table. Instead I've been successfully procrastinating for the last hour by adding a couple of recent articles to my blog, then scanning through blogs by friends to see what they've been up to, then clicking on their links to discover new blogs (such as Surlyboy's blog: A Falling Out With The In Crowd. Love the name, liked the cynical humour of his posts).

Having done all that, and still not quite ready to finally do some actual work, I thought I'd write a proper, personal post here, instead of just cut'n'pasting in something impersonal that I wrote earlier in the week...

***
As an aside, if you're wondering why I'm supposed to be reading grant applications for Arts Victoria, it's because I'm part of a peer-based advisory panel who advise the staff of that particular state government department on who to award grants to.

It's always flattering to be asked to sit on these sorts of panels. It's a compliment, a sort of arts-industry accolade: "That man over there - yes, the one lounging casually by the aspidistra, a glass of champagne in hand - has refined taste and highly atuned critical senses. He's a mover-and-shaker in the arts community. He knows enough about obscure cultural stuff that we should ask his opinion about who to give money to. Get him on a peer assement panel, quick!"

It's also valuable from a professional point of view because A) I get to read how other people write their grant applications and take notes on how to make mine better, and B) It helps further my awareness of what's happening in the cultural sector.

God, I really must be an arts administrator at heart if I'm getting this excited by a huge folder of paperwork!

***
Things that have happened this week:

Okay, I've been writing this post for almost an hour now, so I really should go and do some work. Those grants have got to be scored by Tuesday at the latest, and I'm supposed to be going to see a movie with my mate Mike this afternoon. Enough angst. Enough procrastination. Although maybe I'll do the dishes first...

Posted by richardwatts at 10:40 am

Ah, that old chestnut. For the same reason I am quietly terrified about the idea of living alone for the first time, which I plan to do soon, because I like to do things by myself. For me it comes down to what you neatly summarised as 'easier.' I don't like to wait for people, I don't like to be at the mercy of the whims of others. I like to know where I'm headed and what I'm doing and step straight out the door.

It's easier in a sharehouse. Instant and accidental company, friends by proxy. Sigh. The sacrifices we make for a social life. Um, guys, whose turn is it to wash up?...

Glad you liked it. There will be more. Sometimes. Interspersed with journalism. And like, you know, stuff. I like stuff.

I occasionally dream of living alone - but that's probably because I share a four bedroom house with my two kids, my ex-wife, her partner, three cats and a chinchilla and fond as I am of all of them, they can be a bit much at times. And my book collection takes up a LOT of space...

Cheers for the props.

Perhaps if you get the RRR job you could swing some of that love my way?

You're welcome Greg. And I'm happy to swing my love anywhere it's needed. ;-)

Seriously tho, if I get the job, one of the first things I'll do is run new training schemes for wanna-be broadcasters, so I'll let you know. Or were you tinking more along the lines of free BDO tickets? *grins*